Home » TIPS & TRICKS » Everything You Should Know About Crampons

Everything You Should Know About Crampons

Have you ever climbed a slippery icy slope and thought, wouldn’t it be great to have more traction? Thankfully, with crampons, there is a way. These accessories increase traction on ice and packed snow thanks to their built-in spikes.

Hiking crampons require compatible hiking or climbing boots. Otherwise, they’ll do more harm than good. That’s why choosing them takes quite some time.

Crampons are an essential piece of gear for anyone planning on doing ice climbing or winter hiking. Of course, you might not use them throughout the entire day if your snow slopes are more ski than climb. But you’ll be grateful for having a pair with you once the time comes.

They will increase grip and provide a secure foundation for you to walk on. We can’t stress how crucial this is, especially if you haul a backpacking tent, winter sleeping bag, and similar gear.

These are made of several components, each one playing a crucial role. Let’s divide the crampon in two: The base and the binding system.

The combination of the above secures the toe and heel of your mountaineering boots to the crampons.

Crampons Vs Microspikes: What’s the Difference?

Although the ultimate goal is the same, crampons and microspike are two different traction devices. For instance, microspikes are chains or small spikes that you can slip over your hiking types of boots. Think of them like the set of chains you wrap around the tires during winter.

Microspikes rest in the inner sole. Thus, they are not suitable for climbing. But they have no match when it comes to hiking on flat terrains and low-angle hills.

And, just like crampons, they have a stainless-steel frame. Nevertheless, they are lighter and more flexible.

Crampons, on the other hand, come in several binding styles. They have bigger and more spikes as well. That’s why they are the top choice when it comes to ice climbing.

How Do Crampons Work?

Think of crampons like a set of football cleats. The only difference is that this time, the cleats don’t come attached to the boot. Instead, it is an accessory that you put on once the time comes.

So, naturally, you can’t bring them to the football field. But the goal is the same: Increase traction on slippery terrains.

The serrated spikes help to cut through the snow and ice, virtually anchoring yourself. This way, you can move up an icy hill without falling.

Ok, we already know that crampons are traction devices that you attach to the boot’s exterior. But how can I bind them together?

There are four known binding styles:

Let’s take some time to talk about each one briefly.

These are, by far, the simplest in design. Strap-ons are compatible with a wide range of boots or shoes. Just make sure that the central bar matches the flex of your footwear. Otherwise, you won’t be able to use it.

However, strap-on crampons, like the Kahtoola KTS Steel or HillSound Trail Pro don’t wrap tightly around the boot. Thus, it is not the best option for dangerous steps. 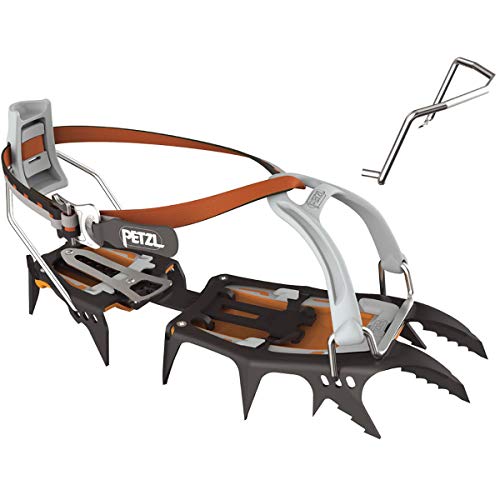 These are more specialized than the last type. Step-in bindings have a thick bail wire that fixes your toes in place. The heel cable passes through a lever that you can use to secure them tightly to your boot.

These are the best ice climbing and mountaineering crampon, since there is close to no movement between the crampon and the boot.

Keep in mind that step-in devices require a heel and toe welt or groove. The PETZL Sarken LeverLock is an example of this type of traction device. 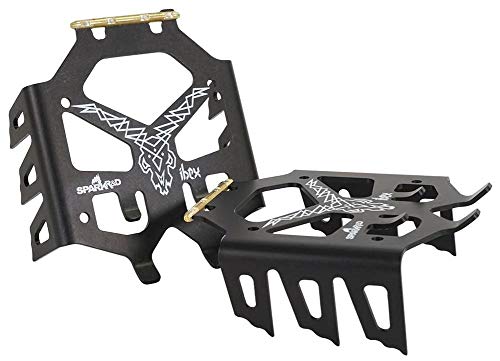 Highly specialized, screw-on or bolt-on crampons are the least popular type. Only fruit boots use this kind of traction device.

These have two separate sections that you manually bolt-on, like Spark R&D 20/21 Ibex Crampons.  One for the toes or ball of the foot and another for the heel.

Splitting the middle between strap-on and step-in, we have hybrid crampons. These only require a heel groove.

These traction devices are compatible with many technical hiking boots with heel grooves. And it is suitable for a wide range of scenarios. Nevertheless, it is no match to step-in crampons when it comes to dangerous climbs.

Most either have an aluminum or stainless-steel frame. Some brands also offer regular steel versions, which are cheaper than stainless steel. But you don’t get to enjoy the corrosion-resistance capabilities.

So, which is the best crampon material? It depends on what your needs are. Say, for example, that you’ll mostly do alpine climbs.

Here, an aluminum crampon would be the best bet. They are lighter than stainless steel. Thus, they won’t weigh you down as much. Sadly, they wear out quicker.

In contrast, chromoly steel crampons are more suitable for general mountaineering. They won’t wear out as quickly as aluminum models.

Not all hiking boots have the same construction. Thus, the stiffness changes depending on the materials and build. So, people started to sort them according to their flexibility.

Hiking boots come with a BX label. The X is a number from 0 to 3. The higher the number, the stiffer the boot.

The same goes with crampons. They have a rating that ranges from C1 to C3, with C3 being the stiffest. So, which one goes with which?

The spike count and layout change from one crampon to the next. Most models come with 10 to 12 points/spikes distributed around the heel and toe areas. However, not all have the same point configuration. Let’s see: 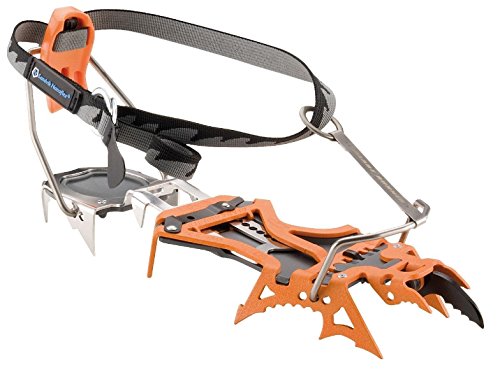 The Cassin Blade Runner is, arguably, among the best mono-point crampons you can find.

There are two types of crampons teeth: Modular and Non-Modular. The first kind is movable. You can replace them once worn or change their disposition according to the climb. People doing mixed climbing are the ones who will benefit from this purchase the most.

In contrast, non-modular teeth, like those found on the PETZL VASAK, are fixed in the same position. As a result, they get dull and shorter with use. Thus, you have to sharpen them often to keep them functional.

It doesn’t seem like a good deal, right? Well, the thing is that modular crampons are usually lighter. As a result, there are fewer moving parts. Thus, less likely to break.

How to properly care

Crampons will last for a lifetime, provided you take care of them. So, here you have some bits of advice:

By following these simple tips, you will enhance the durability of your crampons.

How Much Do Crampons Cost?

You can get budget options around $60 bucks. These are more suitable for beginners or people who don’t do a lot of ice climbing.

But if you’re a mountaineer climber who gets a thrill from technical climbing or glacier hiking, you are better off with premium models. Remember that these traction devices keep you from falling while climbing or walking on ice.

So, better get something reliable. Overall, you don’t want to go cheap.

In short, you can find anything from 60 dollars, like the Hillsound Trail Crampons, to $350 bucks for a pair of Cassin Blade Runner crampons.

Crampons: Secure Your Path Through The Ice

Ice climbing, ski mountaineering, and glacier travel, these have a couple things in common: High altitude and slippery surfaces. That’s why bringing a traction device such as a climbing crampon is critical. Their sharp teeth will enhance your grip, allowing you to walk or climb as you please.

Keep in mind that not all crampons are compatible with any hiking boot. Remember that B3 goes with all three (C1, C2, and C3), B2 only with C2 and C3, and B1 and C1 belong together. You may need mountaineering boots for mountaineering adventures.

Now, it is time for you to hit the market and find the best pair of crampons for you!

Home » TIPS & TRICKS » Everything You Should Know About Crampons

This site uses Akismet to reduce spam. Learn how your comment data is processed.

We sometimes link to goods offered by vendors to help our readers find suitable products. Some of these links may be of an affiliate nature, which means we earn small commissions if items are purchased. Read more here.

Manage Cookie Consent
We use cookies to make sure we give you the best experience on our website. If you continue to use this site we'll assume that you've accepted our cookie use.
Manage options Manage services Manage vendors Read more about these purposes
Preferences
{title} {title} {title}